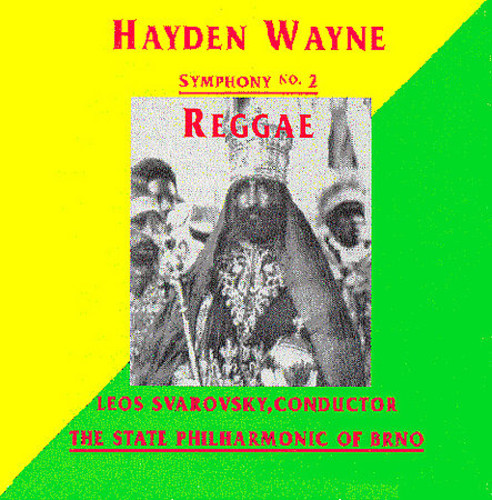 As idiomatically specific as the Minuet, Waltz, or Two-step, Reggae's double-time/single-time identity, where the downbeat supplants the back beat, has grabbed it's place in music. Stewart Copeland's (of the band, POLICE) micro-time led me to the heart of Reggae. I was resistant at first. Being a 'dyed-in-the-wool' Rhythm and Blues devotee, I initially thought of Reggae as MOR (middle-of-the-road) R & B, a noncommittal approach rather than the darkness of R & B's soul. But as I got deeper into it's process, I not only felt it's lightness of being, but it's limitless ability to transform anything to sit on it's rhythmic obstinato. The first movement was composed May 8, 1984. I continued working on the symphony over the next three years and completed the entire work May 20, 1987 SYMPHONY #2-REGGE along with SYMPHONY #3-HEAVY METAL and SYMPHONY #4-FUNK comprises a trilogy. Hayden Wayne (born 3/2/49) (composer/librettist) may be one of the first in his generation to take the rare route through pop/rock music's highest levels to reach where he is today. He began playing piano at the age of four and played tenor drum in the orchestra pit of The King And I at the age of five which his father was conducting, and performed his first composition in concert at the age of eleven. He won a second prize medal for piano solo from the New York State Music Awards at fifteen. The '70s saw him performing in the pop/rock world for such major-label backed bands as Man (CBS Records) and Jobriath (Elektra Records). He toured with the likes of Sly Stone, the Yardbirds with Jimmy Page, Billy Joel, Gordon Lightfoot, Gladys Knight and the Fifth Dimension. Eventually, tired of touring, he took (or rather went back) to composing. In his unique position - with a classical training and a wealth of pop/rock experience - he began experimenting with a synthesis of various genres/styles. As a composer, in 1983 Mr. Wayne opened a new theater for the Mark Taper Forum in Los Angeles with his metaphorical circus WIRE, won $10,000 USD as national first place in 1987 from the National Institute for Music Theater with NEON (A Street Opera) . In 2000, NEON won a 25,000 DM prize in the International Prague Opera Competition. He was commissioned to write IN MEMORIAM: A CELEBRATION, by the Interfaith Concert of Holocaust Remembrance, which premiered at Saint John the Divine in New York in 1993. Subsequently linked with SINFONIETTA # 1: THE KLEZMER and AN ELEGY INTO MADNESS, specifically commissioned for the Fiftieth Anniversary of Israel, and titled A TRIPTYCH, had it's world première at Mandel Hall, the University of Chicago in January 1998. In February 1995, his SYMPHONY #4-FUNK had it's world premiere at the Janacek Theatre in Brno, The Czech Republic. It sold out in one week seven months in advance and was requested to be part of the Twentieth Century Music Festival and performed at The Rudolfinum in Prague October 21, 1995. The recording of the work would ultimately find itself on the music play-list of President Bill Clinton's Air Force One! Mr. Wayne also has several film scores and award-winning commercials for television to his credit. To date, Mr. Wayne has written over four hundred compositions including: SYMPHONY #1-THE SYMPHONY OF FRIENDS, the ballet CIRQUE DE LA LUNE, DRACULA (Opera Erotica), PIANO CONCERTO #1 (The Rock 'n' Roll) and CELLO CONCERTO #1 which are paired as a diptych: SINFONIETTA #2 (It's a Boy) and #3 (The Emerald); VIOLIN/PIANO SONATA (The 'Kraft'); The Symphonic Trilogy: #2-REGGAE, #3-HEAVY METAL, #4-FUNK; and SYMPHONY #5 AFRICA [A Tone Poem] (all recorded by the State Philharmonic of Brno, on New Millennium Records); the choral symphony SYMPHONY #6-THE GIFT; SYMPHONY #7-CELESTIAL DANCES and SYMPHONY #8-1421; the string quartets: THE NUZEROV QUARTETS #1-The Rosenberger Variations and #2-The Romantic, # 3, 4 & 5, #6, 7 & 8, and # 9 & 10, performed by the Wallinger String Quartet; FIVE DANCES FOR CELLO AND PIANO and PIANO QUINTET #1 (all available on New Millennium Records), and hundreds of songs in various eclectic styles. The State Philharmonic of Brno is one of the much respected and critically acclaimed performing and recording orchestras in the Czech Republic, Europe and the world. International concert tours have been enthusiastically received throughout Europe, Japan and the United States. Leos Svarovsky studied the flute at the Prague Conservatory, won second prize in the International Competition in Ancora, Italy, in 1981, went on to give flute solo recitals in Europe, the United States and Canada while studying conducting at the Prague Academy of Performing Arts. In 1985 he worked as assistant to Zdenek Kosler, head of the Opera Ensemble of the National Theater, Prague. From 1985-87, he conducted the Prague Chamber Orchestra, later to be engaged as assistant conductor by the Brno Philharmonic Orchestra. In 1991, he was appointed principle conductor, a position he would hold for four years. The same year, he was granted the Von Karajan Endowment which enabled him to study with Sir Georg Solti and Claudio Abbado in Salzburg. He also holds a post as a Professor of Conducting at the Janacek Academy of Music in Brno. In 1995, he was the Music Director and Principle Conductor of the Czech Chamber Philharmonic Orchestra of Pardubice.
This website uses cookies to personalize content and analyse traffic in order to offer you a better experience.
I accept Learn More
back to top